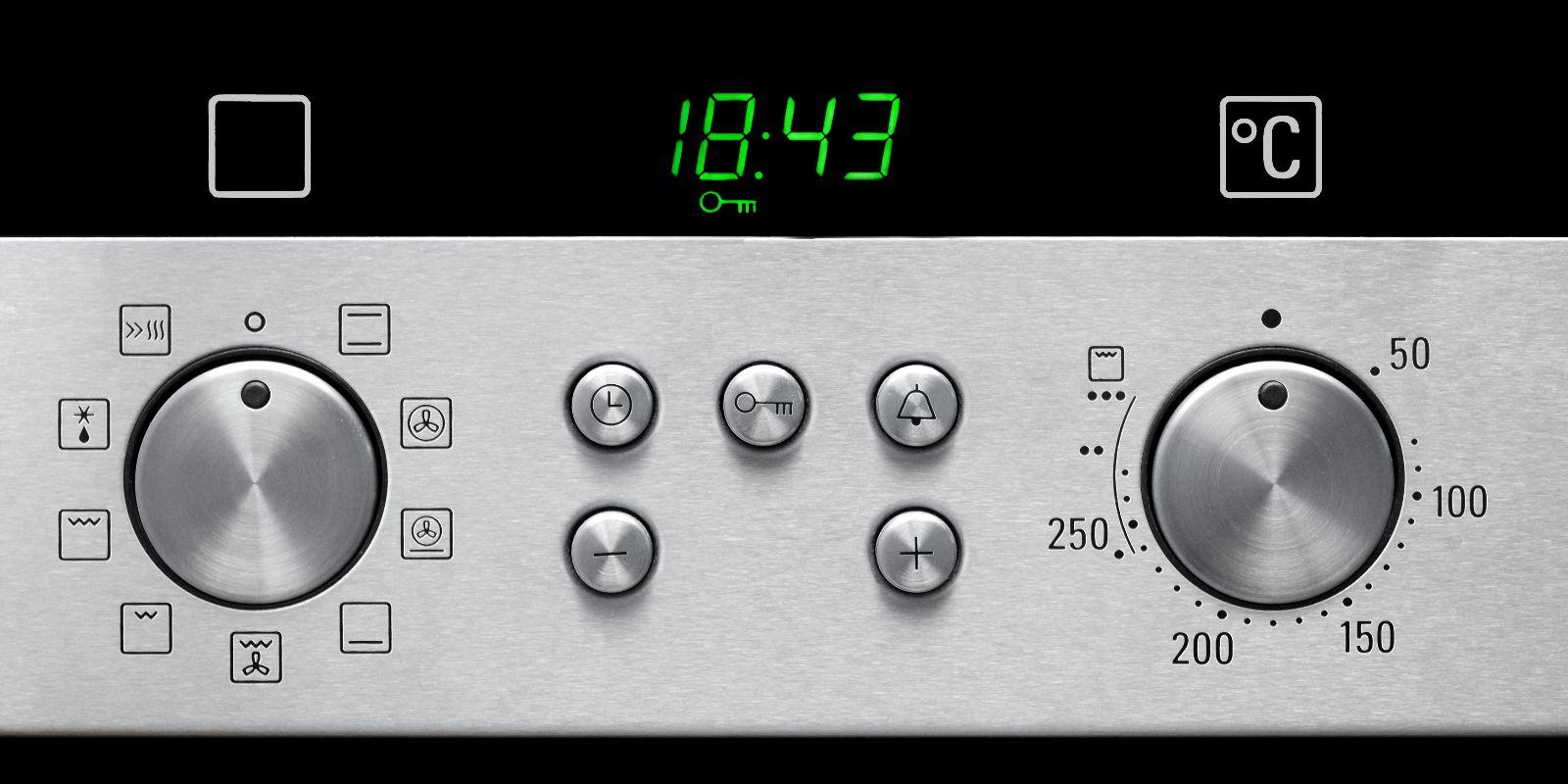 Have you ever looked at all the symbols on your oven and wondered what they actually all do? Most of us buy an oven with the hopes that it will serve us well for years to come, which is why maintaining your oven properly is essential. You ideally want your oven to have all the cooking functions you need – but what do those oven symbols mean?

This setting is great for gently cooking stews and casseroles. It’s also a good option for crisping up the base of a pizza or pastry case.

This is a good option for single-shelf cooking of pastries or scones, or something substantial such as a large fruit cake. This setting also works well for roasting meat.

A single horizontal line at the bottom of the square with a fan above it indicates that heat will be produced at the base but will be wafted around by the fan.

This is great for keeping the top of a dish moist while the bottom gets nicely cooked. It’s a good option if you want to avoid the need for blind baking pastry on pies and quiches, and also works well for crispy pizzas.

A fan surrounded by a circle represents an oven fan with its own heating element. Heat comes from a circular element surrounding the fan at the back of the oven and the fan then circulates this heat.

Good fan ovens will spread heat evenly, so whether you’re cooking near the top, bottom, back or front you should get similar results. If your oven’s heat distribution is poor, you may have to move your trays around to get even cooking results.

A fan symbol on its own, or with horizontal lines above and below it, shows that the fan is spreading heat from the upper and lower heating elements, rather than from the back.

Fans are good for most types of cooking, particularly when you’re using more than one shelf. They also work well for roasting meat, where you want the meat to be tender on the inside and well done on the outside.

A double zigzag line at the top of the symbol box means that heat is being produced by the whole grill element. Some grills are designed to be used with the door closed, while some need the door to be open, so check what your oven’s manual recommends.

Good grills will make sure that all your food gets crisped or browned evenly, whereas poor grills will give patchy results.

If you use the full grill, you’ll be able to cook a lot of food at once – it’s a good choice for anything that sizzles, such as sausages and bacon. It can be handy for browning off meat, the top of a lasagne or for making a large round of toast.

For half-grill settings, only one section of the grill element gets hot, so remember to make sure your food is directly under this part of the grill.

Having the option to use half the grill is handy if you only want to cook a couple of sausages or brown a slice of cheese on toast.

A zigzag line at the top with a fan below means that the grill and fan are on at the same time. The fan spreads the grill’s heat, making it less fierce.

This means it’s good for cooking through thicker pieces of meat or fish without heating up the whole oven or burning the top.

A zigzag line at the top and a horizontal line at the bottom shows that the grill is being used in combination with the lower heating element.

This is a good option for pies, tarts or pizzas that need a crispy base and a browned surface.

Some ovens have a defrost setting, represented by a snowflake with a water droplet emerging from it.

This means that the fan is on but no heat is produced, so no cooking takes place. The moving air defrosts food much more quickly than simply leaving it on the kitchen table – a handy feature if you’re in a hurry to defrost some meat for dinner, for example.

Your oven may have a separate light setting, meaning you can turn it on when the oven isn’t in use – this makes it easier to spot grime when giving it a clean. With some ovens, the light comes on only when the oven is in use.

Three lines on top of each other represents the plate-warming function.

This gently warms plates or other dishes to prevent food from cooling too quickly when served.

There are lots of ovens available now that offer high-temperature pyrolytic cleaning.

This is a program that heats up the oven to around 500°C, which has the effect of incinerating burnt-on cooking grime. You are then left with the straightforward job of wiping off the ash that’s left behind.

The symbols used by manufacturers for pyrolytic cleaning aren’t consistent, but examples include a capital P, or a series of dots or diamond shapes that increase in size.

This does what it says on the tin. Set the alarm for your chosen time and you’ll be alerted by buzzing or beeping when it’s time to check if your food is cooked.

These are more commonly found on hobs, but you do sometimes get a child-lock option on ovens, too. They generally work by pressing and holding a touch control for a few seconds to activate or deactivate the child lock. When the child lock is on, the oven will not respond to buttons being pressed or dials being turned.